A business owner from Jalazoun refugee camp in the West Bank of the occupied Palestinian territories has opened the first vegan bakery in the region. Khaled Safi, brother of the Executive Director of the Palestinian Animal League, Ahmad, has committed to ensuring that all of his baked goods are free from animal products going forward. 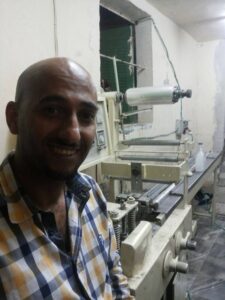 The move, Khaled says, was very simple to make given that very few animal products are used during the baking process for the traditional Palestinian pastries he produces.  “We simply switched from dairy milk to soya milk and stopped using eggs in our glazing. We already used vegetable-based margarine in all of our products – the impact on cost, taste and quality is non-existent, but the positive impact on animal welfare will be significant”.

Khaled not only does a roaring trade in delicious pastries and cakes within the camp itself, he is also hoping to provide his wares to businesses in the nearby city of Ramallah. Various restaurants and stores in the busy city are beginning to offer vegan products to their customers and he hopes that his locally-made, cruelty-free produce will soon be on the menu.

Said Ahmad, whose work with the Palestinian Animal League, the only animal protection group in the occupied territories, influenced his brother’s decision: “I am delighted that my brother’s business is showing just how easy it is to replace animal products with cruelty-free alternatives. Not just that, but the fact that Palestine’s very first vegan bakery is being run from the refugee camp in which Khaled and I grew up also goes to show that the animal protection movement can grow and thrive in all parts of Palestinian society”.