Ahmad Safi is the founder and Executive Director of PAL. Here he shares with us some of the organisation’s history and his motivation for establishing an animal protection movement in the occupied Palestinian territories.

What made you decide to create PAL?

I grew up in a place where human rights are persistently violated, and where the dehumanisation of the Palestinian people is systematic and a result of the ongoing military occupation of our land. Palestine is a place where people struggle to survive, and some don’t make it. It can be hard to simply keep on living here as the lives of my people are taken away from them by military bullets on a daily basis. Others disappear and, sometimes without charge or trial, are held in custody for months or years. It is a mess. When you grow up in this type of environment; where violence is the norm and life is cheap, it is easy for you, particularly as a youngster, to get sucked into the relentless cycle of violence. It is easy to get into fights, get into trouble, get hurt or get killed. It is easy to take out your frustrations on others; whether they are people or animals.

I don’t want another generation of young Palestinians to grow up under occupation but, as an individual citizen, there is little I can do to make that wish a reality. I began to realise, though, that there are things that I can do to help within my own community. I came to understand that those of us who are suffering do not have the right to inflict further suffering on others. I realised that if we begin to spread a message of compassion and rights – for all living beings – within our own community, we can help animals and people to deal with the oppressive controls we have placed upon us. I realised that the right not to suffer, not to be killed, not to be hurt unnecessarily should be shared by everyone; people and animals. And it was with this in mind that I decided to create PAL back in 2011. Our work focuses on helping animals and empowering young people within Palestinian society.

In the beginning, how was your work received? Has the perception of your work changed since PAL was established?

People were confused at first and some people were even angry. Many people demanded to know why we were working for animals when people were suffering so much. Since then, we have shown by example that our work is focused on both animals and people and, as we have demonstrated this, we have gained more local support. When you live under occupation, you need to be mentally and emotionally strong and this can result in a detachment to your surroundings and each other. People can become guarded and closed. Our work to protect animals helps people to focus on feelings that they might have to push away from their minds in their day-to-day life. Compassion, caring, love and concern not only benefits the animals, but also the people who might not have an outlet for such positive feelings in their normal lives. 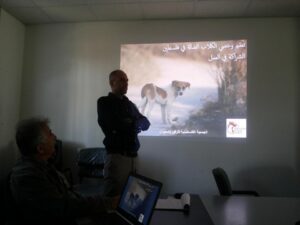 Presenting our spay and neuter scheme to the authorities

What are your biggest achievements with the group so far?

I am really proud that, despite our organisation just being four years old, we are being approached by the authorities in Palestine to give expert advice and support to them in the implementation of important projects. For example, we are leading efforts on bringing an end to lethal control of street dogs and replacing current methods with humane spay and neuter programmes. We have begun to work to tackle welfare problems for working equines and the Ministry of Agriculture has approached us to ask for our support in the development of a modern animal welfare law for Palestine. I am delighted that we are playing such an active role in shaping the way in which Palestinian society treats animals but it is big responsibility; and we need as much support as we can get.

What do you hope to achieve in the coming year with PAL?

One of our major challenges remains convincing the general public of the importance of our work. But the interesting thing is: principles of animal rights are not new to Palestine’s predominantly Muslim community. In fact, animal rights and human rights were recognised as extremely important by the prophet Mohammad in our history, but many people have lost sight of that over the years. Education and awareness-raising remains a cornerstone of our work and runs through everything we do.

On the ground, we are keen to move forward with our project to establish an animal welfare law, and hope to find funding for this soon. Our spay and neuter programme for street dogs is beginning and will be well underway by early 2016. I hope that it will be a huge success and we will have the opportunity to expand work into other major Palestinian cities. Finally, I would love to be able to strengthen our work in Gaza; something which is a huge challenge. We want to make sure that we are reaching out to all parts of Palestinian society and that everyone who wants to be involved is given the opportunity. With a group of our hard-working volunteers

You have a growing group of volunteers who are committed to the work of PAL – tell us about how you have managed to engage so many people in your efforts for animals.

One of the good things, if there can be such a thing, about the occupation is that we have a real sense of community. Young people are used to helping their families and friends and communities are used to coming together to provide for each other. There is a strong sense of solidarity between Palestinian people. Until now, animals were largely considered to sit outside of our sphere of responsibility but that is changing. The young people we work with are just as likely to run to help an injured animal on the street as they are to help an injured friend, and this is great step forward. Young people know that by working with us, they are doing something positive for their own community and their own society; I think this is what keeps them coming back to help us.

In the mountains with my eldest daughter, Sama

How can people help to support your work from overseas?

People can help in so many different ways, for example, by spreading the word about our work on social media, from our website and when talking to friends and relatives. There is a stereotype that people hold in their minds of the Palestinian people; perhaps they think we are terrorists or helpless victims of war. But we are just like them, just like everybody else. We care about animals and we care about the environment. Helping us to break those stereotypes will open up our work to audiences who might never have dreamed that there might be an animal protection group working in Palestine. As with any small organisation, we also need funds so if you are able to donate, we are hugely grateful.

I am the proud father of three wonderful daughters; Sama, Laila and Alma. I love spending time with them – they have very different personalities and it is a joy to watch them learn, grow and form their own ideas about the world around them and their place in it.

Previous Post My Inspiration for Working with PAL in Italy 23/04/2019 Sometimes a murderer, sometimes a hero, just how the context requires Read More