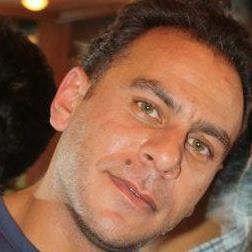 Our next interviewee in our “Meet the Team” series is Sameh Arekat. One of the founding members of PAL, Sameh’s work is focused on working with volunteers and young people; playing a vital role in delivering some of PAL’s far-reaching educational projects. Here we find out a little more about him.

How did you get involved in PAL?

As one of the founders of PAL, I have always been interested in the social issues as well as the animal issues. Once Ahmad suggested establishing this league, I did not hesitate for a second to support him with all what I had at the time. I wanted this idea to see the light as soon as possible. At the beginning, this organization was nothing but an idea, so as a team, we started thinking of a way to grab more attention and make more people join us. At the beginning, we faced a lot of struggles, especially that we are establishing this organization in a country the lacks the basic rights for human beings, not only animals. Despite all the struggles and problems we faced, we insisted on establishing this organization as we were motivated by the sense of humanity that is still left in us, to help the ones who are in need.

What is your role in the organisation and what does that entail?

I work as a manager for a few projects, I also work to attract more volunteers who have the will to help us and to develop this idea. Here, I would like to talk more specifically about one of our projects, which is Young Journalists for Animal Welfare, where I consider it as the best tool to spread more awareness regarding animals as well as the main purpose behind the idea of the league. We first start spreading our ideology amongst the college students, whom take our message and tell their school students about it. In addition, I help with almost all the activities and projects that are held by the league. I also try to give my mates new ideas to activate the role of the league in our society. We believe that the change comes from our young generations; thus, we care a lot about our college students who help the school students to play an effective role in the society. 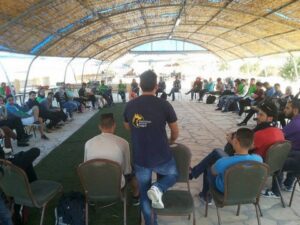 Tell us about the activities that you plan to be involved in in the coming year.

One of the most important activities that we are planning for in the future is organizing an international conference for the animals’ rights in Palestine, which is a big challenge for us, especially with the current Palestinian situation where we face constant violations against us, but we believe that we will succeed in enforcing this conference because we trust ourselves as well as our idea, and we also believe that justice will prevail.

In addition, we are in the second stage of Young Journalists for Animal Welfare, in which we now work double the work we used to do before. The volunteers have special talents and abilities that allow them to play an effective role in this project. On the other hand, I found our other projects as important as the Young Journalists for Animal Welfare, in which all of them are connected together, we focus on all of our projects and separate the work fairly on them.

For next year, we are planning to increase the number of the children who benefit of our projects and especially Young Journalists for Animal Welfare. For this year, 2015, we are working with 400 kids who are divided into 20 groups, and we aim to double the number for next year. You are working for animals in a time when there are huge challenges being faced by the people of the occupied territories. Does this make your work more difficult?

“Being a victim yourself does not give you the right to victimize someone else.” This is the quote that we wholeheartedly believe in, and whenever we talk about PLA we must begin with this quote. We believe that being under oppression and facing a lot of violations for your rights should be a motivation for you to feel others’ pain, especially those who are oppressed, and this what motivated us to continue working and establishing new ideas and new projects. For instance, one of the basic rights for any human being is the right of movement, and we lack this right in which we hardly move from one city to another as we propose our projects to other students due to the Israeli military checkpoints. Despite all the challenges that we face, nothing will stop us from fighting for our rights, and we cannot discriminate in rights, in which every single creature has the right to live with dignity and respect, and we are willing to defend the ones who are oppressed and cannot raise their voices.

Next Post Will you help to make our 2016 European tour a reality?