Dutch officials to consider export of “attack dogs” to Israel

PAL’s “No More Dogs of War” petition, which calls upon the Dutch government to end the export of “attack dogs” to Israel, where they are used as living, breathing weapons against Palestinians was closed on Friday 5th February, with almost 3,000 people from over 65 countries from around the world lending their support to the initiative. Backed by Dutch NGO, DocP, the petition was handed to government representatives at the Dutch embassy in Ramallah by PAL’s Executive Director Ahmad Safi this morning, having received the formal backing of the Palestinian Ministry of Foreign Affairs on Sunday. The petition will also be submitted directly to the Dutch government form the Deputy Foreign Minister in the next few days. This comes ahead of a meeting of a government committee in the Netherlands on Wednesday to consider the country’s position on the unpopular practice of training and exporting dogs to be used by the Israeli military. 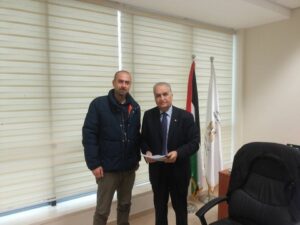 Executive Director, Ahmad, with the Deputy Minister of Foreign Affairs

“Our call comes as a result of concern for both human rights and animal welfare. Dogs are not weapons to be used to attack and intimidate members of the public, but living, breathing beings who did not ask to be part of a violent conflict. We are delighted to have received support from Dutch organisation, DocP, as well as officials here in Palestine. We firmly believe that animal rights and human rights issues can and should be tackled together. We hope that the pressure and publicity caused by this campaign will help to convince the Dutch government to do the right thing”. 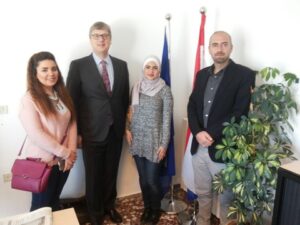 Meeting with Dutch officials this morning

Mr Safi said the meeting this morning with the Dutch officials had been a success; with the team discussing both human and animal rights concerns surrounding the use of dogs as weapons against Palestinian civilians. Peter Mollema, the Head of Mission at the Netherlands Representative office in Palestine, has agreed to look into the matter, which has also been raised by other groups with his colleagues in the Netherlands. He agreed that, while the export of dogs for use in the military is not illegal, the deliberate use of dogs as weapons could be considered to be.

To coincide with the submission of the petition, DocP sent a formal letter to officials in the Netherlands to back the call to bring an end to the export of dogs to Israel for this purpose.

The PAL team thanked all those who signed the petition, saying it highlighted the importance of the international solidarity movement.

Find out more about the campaign: