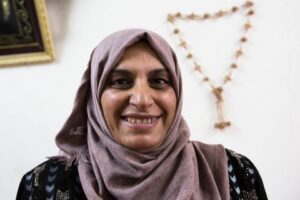 Wajeha is putting her culinary skills to use in her new vegan catering business.

Wajeha Khalde previously spent her time as a seamstress as well as caring for her family and home, but had the idea to provide a catering service to make the most of her culinary skills. Given the growing interest in veganism in the area, in part thanks to the work of the Palestinian Animal League, whose founder, Ahmad Safi was born and raised in the same camp, Wajeha has committed to making her business 100% vegan.

Wajeha said: “I had been thinking for some time about taking on a new challenge and, after I spoke with Ahmad Safi, he suggested that a vegan catering business might be a great idea. We agreed that this initiative would provide for people looking for an alternative diet but there was also potential to create traditional food from Palestine, which is historically vegan. In this way, we can learn more about our history and culture.

“I hope to work with other women in the community and also provide a catering service for people who would like to have good vegan food for their events at a reasonable price. At the moment, we are beginning to advertise that we can cater for private events but, dependent on our success, we may begin to sell food at markets to reach a wider group of people. All of our products will be vegan, fresh and we use no products sourced from Israel. We hope that this new initiative will be a huge success in the camp and beyond”.

Wajeha’s very first commission was for a group of 20 students, some from Al Quds University and the others, visitors from the UK taking part in a cultural and educational exchange, who visited the camp earlier this week to learn more about life there.

“The food served to the group by Wajeha are typical dishes from Palestine. Many people are surprised to find that a large part of our food is naturally vegetarian or vegan so, while it is unusual for a business to make an explicit commitment to only serve vegan food, our guests today are having a very authentic Palestinian culinary experience!”

Traditional Palestinian dishes, all of them vegan!

Serving fatayer (a type of pastry filled with spinach) as well as aubergine and tomato, beans, peas and a local soup made from herbs, the guests enjoyed a veritable feast. The best thing – all of it was cruelty-free!

Mr Safi went on to explain that, in Palestine, the people’s connection to the land is much more closely associated to arable agriculture rather than livestock. Of all the surrounding countries in the region, data from Palestine has shown that meat consumption is the lowest per capita – 25kg per person per year – in comparison to, for example, Israel, where meat consumption is around 102kg per person per year. The other Arab countries in the region, with the exception of Kuwait also have per capita meat consumption which is around equal to or lower than the world average of 42kg per year per person[1].

He said: “The vegan outreach work that is carried out by PAL is very much focused upon helping people to reclaim food traditions which connect us to our culture, heritage and, ultimately, our land. Veganism is often seen as a western, privileged, modern and quite radical practice but, for us, it is about reclaiming and celebrating what we have always done. Our approach of connecting veganism with empowerment of people, as well as protection of animals, really resonates with the people here and we expect to see the movement grow further in future”.